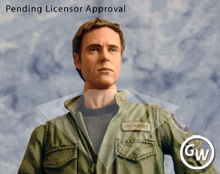 When Diamond Select Toys first announced that the company is creating officially licensed action figures based on Stargate SG-1 and Stargate Atlantis, we pelted them with questions. When will they be available? Which characters will be immortalized in plastic? Where can we get ’em? Diamond Select answered all this in our initial Q&A … then offered Stargate fans the chance to ask even more.

Now the answers have arrived! Below we present our second Q&A with Diamond Select Toys — and the fun just won’t end. If you have a question you don’t see answered yet, jump on over to the “Ask Diamond Select Toys!” thread at GateWorld Forum to post your question. We’ll continue to send your questions to the company as we anticipate the summer 2006 debut of the first SG-1 figures.

The company has also just made a big announcement about a toy Stargate to go along with the figures. Look for that news below this Q&A!

Having seen that Colonel O’Neill, General O’Neill, Serpent Guard and Daniel are to be the first set, I’d like to know the time frame for the rest. When will Sam, Teal’c, and the rest be coming out and why was the choice made to have a Serpent Guard and a variant instead of having the whole team come out at once?
There are plans for other series to come out as long as the demand is there. The first series we felt should have some of the most recognizable characters.

In the announcement it was stated that the sculpting would be by two studios, Plan B and Jean St. Jean Studios. Which studio is doing which figure? I’m assuming that Plan B will do the human military characters and Jean St Jean the aliens.
Jean St. Jean Studios will be doing all the figure sculpt, while Plan B will concentrate more on the accessories that go with the figures.

I don’t want to speak badly (or sound like a smartass), but the “Serenity” figures did not look as close to the characters as they could have been. Will the SG-1 figures be more faithful?
The people that have seen the Stargate figures (and you will very soon) have all felt that they were some of the best figures that we have ever made. Jean St. Jean Studios has done an amazing job with the figures, as has Plan B with the accessories, and his attention to detail will be quite obvious once the figures are shown.

The characters went through major changes over the nine years. In the initial assortment of O’Neill, Carter, Teal’c and Jackson, from what “era” will they be (glasses and long haired Daniel [Season One], Teal’c with the goatee [Season Four], General O’Neill [Season Eight])?
The initial release will only have Jackson and O’Neill, and with each figure we try to best represent the characters different looks. Obviously the General O’Neill will have a different feel than the Colonel O’Neill.

What color uniforms will the team be wearing?
The core assortment figures will be wearing the green field uniforms.

Will the figures’ hair (except for Hammond and Teal’c) be real or molded?
All of the figures will have sculpted hair … except for those that lack hair in the first place.

How many articulation points will there be?
For the most part the figures will have about 14 points of articulation.

Will the human military figures be made using Plan B’s next generation body (i.e. ball hips)?
All of the figures are from totally new sculpts. Plan B will be working on the accessories.

Will Colonel Mitchell (Ben Browder) be released in the first wave?
No.

Will the line-up include the average Jaffa, be it serpent guard or horus? If so, will these figures include retractable helmets?
The core release contains a Serpent Guard Jaffa with a removable helmet.

Since you will release a Serpent Guard in the first wave, how about slapping a gold coat of paint on it (and a new head sculpt) for our first Apophis?
It’s certainly an easy repaint, but Apophis and our Serpent Guard have very different builds. If we were to do an Apophis figure, it would be as accurate as we could make it.

Will we get to see any Asgard figures?
They’re definitely an important part of the Stargate universe, but they’re also very difficult to reuse for anything other than an Asgard (unlike the Serpent Guards).

When will the Atlantis figures be released, and in what order?
We will announce future series of figures once the first ones ship. But the first several series will be SG-1 based.

Any chance of making a Stargate toy to send the figures through?
Hmmmm. That sounds like an idea! If only the government would share the technology …

Will you take advantage of Plan B’s already existing gun molds to include lots of weaponry?
All of our accessories will be new, Stargate– and character-specific accessories.

Will there be separate packs of accessories we can buy?
Just figures with accessories for now.

Will the figures come with display platforms to stand on?
The figures will not come with a base, but there will definitely be something they can stand on in the future.

Have you thought about making inanimate Stargate objects (e.g. the Stargate, Prometheus, Daedalus, etc.)?
The Stargate … why would we make that!

Will there be any chances of an Atlantis city toy/model?
Right now there are no plans for that.

Have you considered including a piece of the Stargate with each figure, to build it if you collect all the figures?
Interesting idea, I will look into that.

When in 2006 will the first line be introduced?
The first series will be solicited in the January edition of Diamond Comics Previews catalog. They will hit shelves in the summer of 2006.

Would these figures be available to buy in the UK as well as America?
The figures will be available in the U.S. through specialty stores like Suncoast and Tower and also at local Comic Retailers. The best thing to do is during the month of January, let you local comic shop know that you want them to carry the figures!

We are currently lining up international partners for distribution in the U.K, Europe, and Australia. All of these countries should have the figures. And again, the best thing to do is to let the local comic shop know that there is a demand for them.

How can I get my hands on these from Perth, Australia?
We should be able to announce the distributor in Australia shortly.

How can we, as consumers, help promote these new figures?
The best thing to do as a consumer and fan is to go to your local comic shop, or if you don’t have a local comic store then Suncoast or Tower, and make the demand known. There have never been figures for this show so the water is untested. If the retailers see that there is a strong demand then there is little doubt that the line will succeed.

In the near future we will be coming out with some ways for fans to let retailers know there is a strong desire. And we will keep GateWorld in the loop of all of these.

Diamond Select has also just announced via their online subscriber newsletter that they will indeed be releasing a Stargate (and ramp), in collectable pieces available with each figure. “Each figure in Series 1 and Series 2 will include a different piece of the massive Stargate — so when you complete your team you’ll be ready to start sending them through the gate,” the company said.

“Also, each alien figure will include half of the ramp leading up to the gate — making even more elaborate displays possible.”

With one alien figure in the first wave of figures (a Serpent Guard), this makes it likely that the second series will also include one alien character. If it also includes a total of four figures, this implies that the complete Stargate will come in eight pieces.

The detailed gate model was created by Jean St. Jean Studios, and accurately includes all 39 symbols and (from the looks of the photo) nine chevrons.

Stick with GateWorld for more on the new toys in the weeks to come — and remember to Ask Diamond Select Toys!

(Thanks to every GateWorlder who submitted a question, and to Diamond Select Toys’s Michael Leavey for the answers!)