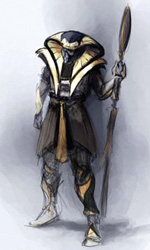 Video game developer Cheyenne Mountain Entertainment today announced the first details on Stargate Worlds, the upcoming massively multiplayer online role-playing game (“MMORPG”) set in the Stargate universe. The game is now in pre-production, with no release date yet set. The company is also searching for a publisher, which will help answer many questions regarding the game’s price, on-going subscription fees (if any), and release date.

Players of Stargate Worlds will be able to create a character from among a choice of races and explore the Stargate universe in a free-form environment, providing for an almost limitless variety of experiences in game play. Some notable features include:

Character classes. In addition to the warriors players will expect to find, the developer is currenting considering non-combative classes such as scientists, pilots, alien engineers, and others. In addition to figuring out technology and cracking codes, such characters might be able to perform for a team such functions as call in mortar attacks in battle — proving that there is more to Stargate Worlds than running and gunning.

Noncombative play. The game will certainly have combat elements, but it will not be a first-person shooter. Noncombative tasks such as constructing devices, mining, trading with other players, smuggling, and diplomatic negotiations will be involved.

“There will be NPC [non-player character] groups out there that can be influenced,” Cheyenne VP of Product Development Joseph Ybarra said. “It’s possible that you can negotiate with a group or village on another planet, and your diplomat can get things for you.”

Vehicles. The developers want to include support for vehicles from the Stargate universe, but it’s too early to know if they will be involved in combat or for transport only.

Squads and teams. Since S.G.C. personnel operate as teams when they go through the gate, game play will allow for the formation of teams of multiple players. Even non-human characters, such as the Goa’uld, Jaffa, and other aliens, will be able to form their own teams.

“When you first start playing we want to give you a grounding with something you are familiar with,” Ybarra said. Players may start out as an SG team member, for example, with the option to later choose whether or not to stay with that.

Guilds. Beyond the team level is the guild, a category joined by a player to work in cooperation with others toward common goals — such as Stargate Command or the Goa’uld, for example. Guilds will be able to interact, and use their combined forces to accomplish tasks that they otherwise could not.

“We really want to encourage that, big time,” Ybarra said. “In order to do some of the things we’d like for you to be able to do, the guilds may have to get really big, in terms of greater than 500 people playing in the guild.

“If you want to build a Goa’uld mothership [for example] … it may require the efforts of several guilds working together to accomplish a task like that.”

Free economy. As with other popular MMO’s, Stargate Worlds will have its own financial economy and trading system.

Atlantis. Cheyenne is regarding the entire Stargate universe as one field of play, and plans to integrate elements from both Stargate SG-1 and Stargate Atlantis.

New aliens. “We’ll probably end up inventing some new alien types,” Ybarra said. “One of the things we like about our relationship with MGM and Bridge [Studios, where Stargate is filmed] is that they’re willing to let us do that.”

No death penalty. Whereas some MMOs provide a player with severe consequences for beginning again should his or her character be killed, that’s something the creators of Stargate Worlds want to stay away from. “We don’t want to penalize our customers too much,” Ybarra said. “Everything we do focuses on positive rewards, so if you make a mistake or get killed by a mortar we don’t want to punish our customers for that.”

Missions. The game’s architecture for assigned missions and quests is one of the first tasks that the developers tackled, allowing players to explore in a free-form environment or to take on an assigned mission. “The quest logic is elaborate,” Ybarra said.

F.R.E.D. One final compelling element of the game is F.R.E.D. (“Field Remote Expeditionary Device”), the mobile platform used by SG teams for transporting supplies on the show. Players will be able to take the device through the gate and place it in a strategic position, keeping extra supplies there and relying on it as a restart point. “F.R.E.D. represents a way you transport materials — an extension of your backpack, but also your response point,” Ybarra said. “… You want to make sure you place it in a position that is advantageous, so that if you get killed you restart in a place with good cover.”

Cheyenne will keep the game up-to-date with the two television series, working with the TV production team in Vancouver, B.C. As the development period for a game of this scale is so long, “Between now and when we’re on the marketplace and you can play our game there will be at least one full season” of the show to air, Ybarra noted.

The inclusion of familiar faces from the Stargate universe — from regulars like Jack O’Neill to recurring characters such as Bra’tac — is not something the company gotten into yet. Expect more on this in the months ahead.

As for visuals, Cheyenne Mountain is not yet ready to disclose its graphics engine. “We originally wanted to do photo-realistic, but [in testing] we’ve discovered we need to back off of photo realistic by a notch or two,” Ybarra said.

Ybarra also spoke to the recent (but still not officially confirmed) cancellation of the PC and console video game Stargate SG-1: The Alliance, saying that the two games have been regarded as two different projects and that the MMORPG had nothing to do with the fate of The Alliance.

“The Alliance product was geared toward the stand-alone retail marketplace, so they were preparing a product that would not be online, basically,” Ybarra said. “Several years ago our original founders had begun negotiating with MGM … [and the two titles] were very independent of one another. The MMO, the online game, is a different product.”

Will Stargate Worlds be a PC-only title, considering the greatly improved graphics and online capabilities of next-generation console hardware? TeamXbox.com is listing the title as an Xbox 360 release — something that surprised Cheyenne Mountain representatives, but which they did not deny.

Stargate Worlds is expected to make an appearance at the E3 trade show in 2007. The game’s discussion forum is now online so that the company can get early feedback from Stargate fans, with a full community site set to launch March 1. The developers also shed more light on the game dynamics in this thread.