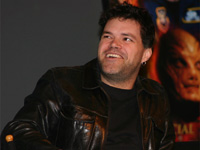 The two took the stage and the laughs began immediately. One audience member prompted Dan to tell a story regarding him and a bear in the Yukon. Let’s just say that included him in the middle of nowhere, a very large bear, a tree, and some urine. Both men peformed an impromtu, live action demonstration involving the difficulty of answering natures call when strapped into alien costumes and armor, and expressed their sympathy for their dresser, a very nice woman by the name of Nancy.Part-way through the panel Dan announced that he was good friends with Aaron Douglas and the next thing we knew Aaron was up on stage. Given the overwhelming applause, Alex and Dan seemed to ponder whether or not their continued presence on stage was needed or wanted.Unfortunately Aaron did not have anything in the way of tidbits regarding the upcoming third season of Battlestar Galactica. However, he did tell fans after the stage panel that viewers will be left hanging still two episodes into the new season.Reporting by Shipperahoy and kiwigater. Photos by kiwigater. Special thanks to blingaway.