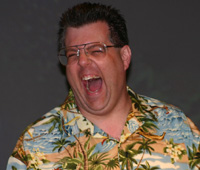 The Official Stargate SG-1 / Stargate Atlantis convention has begun! After winding lines with hundreds of fans registering late into the night on Thursday, Friday’s events kicked off with Bruce Woloshyn on stage. Bruce is a personal friend of GateWorld’s, and the former digital effects supervisor (now a consultant as he turns his attention to a big movie) at Rainmaker — the local Vancouver house in charge of effects for Stargate Atlantis.Bruce took to the stage at 2:30 p.m. He was introduced with a reel of special effects clips from the last seasons of SG-1 and Atlantis prepared by his team at Rainmaker, including frame-by-frame breakdowns of how the effects shots were created from bare beginning to end.

He described his team working on four to seven episodes at the same time and described the dificulty in creating composite shots, including real life aspects versus completely digitalized shots. Atlantis‘s pilot episode, “Rising,” took some 1,700 prep hours to build the model of the city alone.After the convention Bruce joined more than 70 members of GateWorld at a special party at a nearby restaurant, moving from table to table and chatting with Stargate fans. More on that soon!Reporting by Shipperahoy and kiwigater. Photos by kiwigater. Special thanks to blingaway.