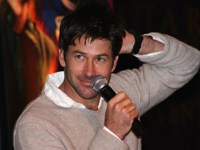 Joe Flanigan, Stargate Atlantis‘s John Sheppard, took to the stage at Creation’s Vancouver Stargate convention on Saturday, sharing his experience working on the show and answer questions from fans.”All the banter is a lot of fun,” Joe said when asked about Sheppard’s relationship with Dr. McKay (David Hewlett). “I think it’s one of the stronger parts of the show when McKay and Sheppard can banter in the midst of [stressful situations].”Season Two’s “The Long Goodbye” gave Joe a chance to run and gun on the sets of Atlantis, as Sheppard and Dr. Weir are inhabited by aliens at war with one another. “It was a lot of fun to shoot,” Joe said. “It’s always fun to track down people and kill them,” he added with a smile.

Joe also shared his feelings on a potential romantic relationship between his character and another series regular, be it Elizabeth Weir or Teyla Emmagan. “I think you have to be careful with series regulars,” he said. “You can have romantic tension, but not romantic fulfillment. … [There is a line,] and once you cross it, you have to pay the piper if it doesn’t work.”Joe also teased one upcoming Season Three episode (story), and shared his diappointment with last season’s “Epiphany,” to which he contributed story elements.Joe Flanigan will appear at the upcoming official conventions in Chicago (August), Burbank (November), and the New York City area (November).Photos by kiwigater. Special thanks to blingaway.