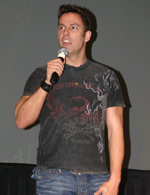 BamBam immediately began the panel with a stunt demonstration of a training sequence he did with Rachel Luttrell (“Teyla”), with the help of Rachel’s stunt double. He went through the step-by-step process of the choreography involved in planning a fight scene, and then performed the stunt in normal time.He did this again, but this time with Torri Higginson’s (“Elizabeth Weir”) stunt double and the help of several of his stunt men. The second, more complicated stunt was a recreation of a fight scene from “The Long Goodbye” and was again performed at both slow and normal speeds. 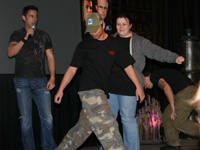 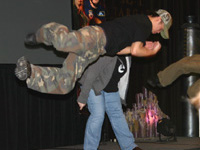 In the third and final stunt, James brought up an audience member to participate in executing the stunt. Unfortunately, this time there was a casualty: Trevor Jones’s nose. Though James brought stunt mats for the falls, Jones (one of BamBam’s crew) hit his face on the side of the stage while throwing himself down for the stunt. Like the professional he is, he finished out the stunt before retiring backstage.

After signing some autographs for fans, James joined GateWorld members at our special get-together at a local restaurant. Stay tuned for more on that party!