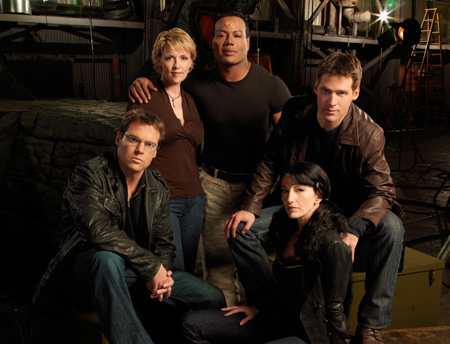 Ben Browder and Claudia Black joined the show in its final two years.
Stargate SG-1 received a new lease on life last year, with new cast members and a new villain to drive the show’s overall story arc. But after years of living under the shadow of the show’s inevitable end, does the new formula really mean that the series could go on indefinitely? Unfortunately not, executive producer Brad Wright told GateWorld.

The studio considered renaming the series “Stargate Command” when it was relaunched with new cast members in Season Nine — ironically, something Wright believes could have helped the show stay on the air longer.

“Sadly, it could have gone on longer had we rebranded it,” Wright told GateWorld. “One of the problems of SG-1 going into its tenth season, and potentially further on into its eleventh, is that when a show has been on for a very long time … there’s a lot of money that is spent that stops going on screen.

“That’s the reason Star Trek: The Next Generation went off the air — not because nobody would want to watch it, but because Patrick Stewart was becoming a big star and needed to move on,” Wright said. “And now, of course, he doesn’t even do television any more. That’s what happens to a really successful franchise. And because seven years is the maximum, generally, the business model goes out to, and that’s generally as far as the actor deals have been made.”

As everyone working on a series tends to require a raise every time they sign a new contract, any TV series will eventually reach a point where it can no longer afford to create an hour of television on its budget.

“I do know that on our show for the last couple of years we’ve had to renegotiate ever year, and that is very difficult from our perspective,” Wright said. “We don’t know: a) whether we’re going to get a network pick-up; b) how much money we’re going to get to make the show. And all of those things are contingent on the cast deals that we make. Which comes first, right? So it’s been difficult the last couple of years.”

Season Ten is now in production, and whispers of Season Eleven may be heard in some halls. Now that the show has gotten a fresh start and new cast members, is Season Fourteen and Fifteen really that unrealistic? “There are pressures on the show that will make it difficult to go out that far,” Wright said.

But one way or the other, Wright doesn’t expect the Stargate franchise to disappear. “If there really is a Season Fourteen, I hope that whoever is making it is having a good time!” he laughed. “It probably won’t be me. I’m hopefully still making something called ‘Stargate.’ Maybe it’s a movie.”