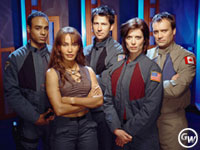 The writers of Stargate Atlantis are making a key change in their approach to the hit series this year: a more deliberate focus on the relationships between the main characters, something some fans have found to be lacking in the show after two years on the air.

The decision came in between seasons, as the writing team paused to take stock of the series.

“One of the things that we did at the beginning of the season on Atlantis is sort of sat back and took stock and said, ‘OK, we’ve done two seasons. Where are we? Where is this show at? What’s working about it, and what’s not?'” executive producer Robert C. Cooper told GateWorld. “And one of the things we thought we could do better was create the sense of camaraderie and relationships between the team. We felt we were getting the action-adventure part of the show right, but that the team itself — the chemistry still hadn’t quite clicked the same way it had on SG-1.”

Stargate SG-1 is well-loved for its strong interpersonal relationships between the members of the team, thanks in part to some deliberate choices made in the show’s early years.

“I remember … in ‘Need,’ when Daniel was going through his withdrawal from the sarcophagus and it had that moment where O’Neill basically held on to him and they had that real cathartic moment together, fans point to that as being a great moment in their relationship,” Cooper said. “And I felt like we needed to have more of those kinds of interactions between the Atlantis team. I think that they were and we were, to a certain extent, taking for granted the aspects of their relationships with each other that maybe the fans weren’t quite getting or connecting with.”

“I think we as writers did things in the early years of SG-1 that galvanized those relationships. And without being corny about it, we wanted to create moments that would be touchstone moments for fans to harken back to when they look back at Atlantis.”