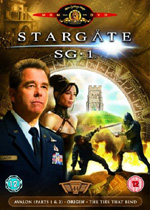 The first volume of Stargate SG-1 Season Nine is now available on Region 2 DVD (U.K. and Europe)! The release includes the first four episodes of the season (“Avalon, Part 1,” “Avalon, Part 2,” “Origin,” and “The Ties That Bind”) as well as audio commentaries, photo and production design galleries, and two featurettes: “It Takes a Crew to Make a Village” and “Director’s Series: ‘Avalon’ with Andy Mikita.”A second volume will be released on Region 2 DVD on April 24. Expect the next four episodes in the season to be included, as well as audio commentaries, photo and production design galleries, and two featurettes: “Inside Stargate’s Props Department” and “Director’s Series: ‘The Ties That Bind’ with Will Waring.”Volume 3 is currently slated for a May 22 release.The complete Season Eight boxed set (Region 2) is now available.From the Pegesus Galaxy comes three new offerings. The entire first season of Stargate Atlantis, a six-disc, widescreen version is now available! In addition to the 20 episodes, there are a number of special features including several “Mission Directives,” some behind the scenes material, a set and studio tour, as well as the audio commentaries for each episode, and various galleries.

The first volume of Stargate Atlantis Season Two arrives on April 10, with “The Siege, Part 3,” “Intruder,” “Runner,” and the fan favorite “Duet.” Special features include audio commentaries, photo and production design galleries, and two “Mission Directives” on the episode’s directors (“The Siege, Part 3” with Martin Wood and “Intruder” with Peter DeLuise).The next four episodes of Season Two arrive on Series Two Volume 2 on May 8. “Condemned,” “Trinity,” “Instinct,” and “Conversion” are included on the disc. Details regarding special features is not yet available, but expect it to have the same audio commentaries, galleries, and featurettes.Volume 3 of Atlantis streets on June 5.Preorder these releases at Amazon.co.uk

and support GateWorld with your purchase! Additional releases will follow in the months ahead — five for each series. Boxed sets are expected for Region 2 DVD early next year.The North American (Region 1) DVD boxed sets for SG-1 Season Nine and Atlantis Season Two are expected this fall, but no release dates have yet been announced. Stick with GateWorld for the latest news!