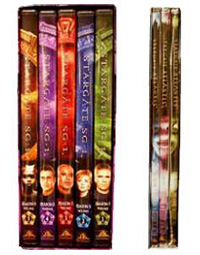 Sony will switch to slim-line DVD boxed sets for Stargate SG-1 this summer, TVShowsOnDVD.com is reporting. Sets will be available for all eight seasons starting June 13, with a new low price of $49.95 each (down from $59.95 for the most recent seasons).The new 5-disc cases are 1-inch thick, versus the 3-inch width of the current sets. The sleeve will include two double-slim packs (two discs each), and one single case.New seasons of the show, starting with the Season Nine boxed set expected this fall, will also be released in the slim-line packaging.The first eight seasons of SG-1 are currently sold as five bundled Amaray cases, which has allowed MGM to also sell each disc individually.Sony took over DVD distribution from MGM when it acquired the company last year. Stargate Atlantis, which made its bow on DVD last November, is already available exclusively in slim-line sets in North America.There is no word yet on whether the company will make the same switch with boxed sets outside of North America. Check out TVShowsOnDVD.com for the original report!(Thanks to Richard, Sue Jackson, David Molinarolo, Ron, Andrew Gorgi, Andrew, Casey Barrett, Dan Chartrand, Scott, and tsaxlady for the tip)