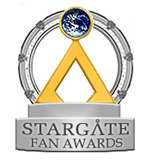 Since its inception in 2001, the Stargate Fan Awards has strived to recognize the “best of the best” in fan-created works. Originally designed to showcase fan works based on Stargate SG-1, last year the program expanded to also incorporate the newest series in the Stargate franchise, Stargate Atlantis. The awards program continues to grow each year, with over 2,000 nominations already submitted for 2006 as fans identify an ever-increasing talent base.

Fans across the globe submit nominations for their favorite works. After nominations close, the authors and artists, in conjunction with the awards team, review their nominated works and place them in the appropriate categories. The awards team completes a final check prior to uploading the links to the Stargate Fan Awards Web site where fans can read and enjoy them online. The fans judge and vote on their favorite works in over 350 unique award categories.

The “Seven Chevrons” is a special award recognizing outstanding authors and artists and their contributions within Stargate SG-1 fandom. These awards utilize a “blind” or “no ballot” process. Fans do not have a list of nominees from which to choose. Instead, they send in votes for their own personal all-time favorites. The works receiving the most votes throughout the fandom win.

For 2006, the team proudly announces the newly created “Eight Chevrons” award. This award is identical to the “Seven Chevrons” but the added chevron provides the distance factor required to reach the Pegasus Galaxy! Hence, the “Eight Chevrons” award recognizes outstanding authors and artists and their contributions within Stargate Atlantis fandom.

This year, both the “Seven Chevrons” and the “Eight Chevrons” awards will recognize excellence within the multimedia category.

The Stargate Fan Awards is currently accepting nominations for fan-created works through April 30, 2006. Visit StargateFanAwards.com to submit your favorites.

After the nominations are announced, voting by fans will take place in June and July. This year’s fan award winners will be announced in September.