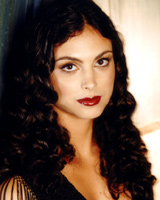 Beware of minor spoilers below!

Morena Baccarin, who played Inara Serra on Firefly and the movie Serenity, is joining the cast of Stargate SG-1 for the history-making Season Ten as a villain (story). Many actors enjoy the challenge of playing an evil character — and Baccarin is no exception. She plays Vala’s grown offspring Adria in the upcoming season.

“I like the nuances of evil,” Baccarin told The Scifi World. “I am trying to be likeable as well. It’s an interesting combination.”

On the set the actress is coping with prothestic eyeware to play the evil offspring of the Ori. “I love the character,” she said. “She is truly evil. The worst kinds of people are the ones with no acceptance and she is one of those. What she believes is the word of God. And I get to wear really cool contacts! … Though it was pretty comical watching me get around feeling the walls with my contact lenses on.”

Developing the character as Vala’s child is also a challenge. But what kind of relationship would she have with her mother? Baccarin says it is “a loving one in Adria’s book. But in my world, very twisted.”

Read more about Baccarin’s backround and the full interview at The Scifi World! The actress is shooting four episodes in Vancouver for SG-1‘s tenth season, which makes its U.S. debut on Friday, July 14.

(Thanks to White Knight for the tip)