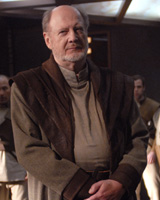 Veteran actor David Ogden Stiers has been cast in the key role of the Asuran leader in Stargate Atlantis‘s “Progeny.” Stiers will play Oberoth in the fifth episode of Season Three, set to air Friday, August 11 on SCI FI Channel in the United States.

Born in Peoria, Illinois, 63-year-old Stiers has starred in such television series as M.A.S.H., Kojak, Murder, She Wrote, several Perry Mason TV movies, and much more. Star Trek: The Next Generation fans may recognize him as Dr. Timicin in the episode “Half a Life.” Currently he plays Reverend Gene Purdy on The Dead Zone, which begins its fifth season on the USA Network on June 18.

Actor John O’Callaghan has also been cast in the episode, playing the role of Niam.

Watch out for spoilers below!

In “Progeny,” Dr. Weir joins Sheppard’s team when they visit the Asurans, a technologically advanced race that claims to be an off-shoot of the pre-ascension Lanteans (Ancients). But after the cool and in-control Oberoth takes them captive, the Atlantis team learns of the Asurans true — and very dangerous — nature.

While it has been confirmed that the Asurans will return in the mid-season two-parter (aptly titled “The Return”), and will be an on-going antagonist in the show, it is not yet known if Stiers will appear in more than one episode.