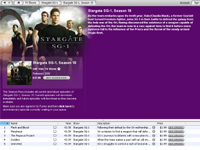 Stargate enters the world of legal downloading, with new episodes of Stargate SG-1 and Stargate Atlantis now available for download on iTunes! The show follows the online success of such series as Lost, Desperate Housewives, and Battlestar Galactica in offering new, high-quality, and commercial-free episodes for $1.99 each, shortly following the first U.S. broadcast.

A season pass is available for $37.99 for each show, offering viewers a way to pay up-front for all 20 episodes (still only one per week — sorry!) and save a little.

The first five episodes of SG-1 Season Ten and Atlantis Season Three are now available. The August 18 episodes were not yet available at press time (29 hours after broadcast).

Past seasons of SG-1 and Atlantis are not yet available.

(Thanks to Philip Alldredge, NowIWillDestroyAbydos, Colonel Sharp, and LOL4JACK for the tip!)