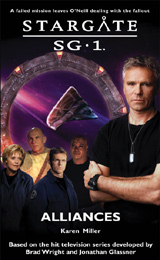 A brand new Stargate SG-1 novel is now available! Fandemonium today announced the publication of “Stargate SG-1: Alliances,” the latest in the popular series of tie-in novels that go beyond the adventures of the television show.

“Alliances” is available both in the United States and United Kingdom, and is the first Stargate novel written by Australian author Karen Miller. The story follows on the heels of the Season Four episode “The Other Side.” Here’s how the publisher describes the story:

Following the disastrous mission to Euronda, the team — and especially Colonel Jack O’Neill — are up the creek without a paddle with a crocodile named Senator Robert Kinsey circling the boat.

The team must ignore the Washington politics and regroup to spearhead a mission to find more hosts for the Tok’ra. It means infiltrating a Goa’uld slave breeding farm and risking their lives — but that sure beats doing 20 questions with Senator Kinsey.

All SG-1 wanted was technology to save Earth from the Goa’uld, but the mission to Euronda was a terrible failure. Now the dogs of Washington are baying for Jack O’Neill’s blood — and Senator Robert Kinsey is leading the pack.

When Jacob Carter asks General Hammond for SG-1’s participation in a mission for the Tok’ra, it seems like the answer to O’Neill’s dilemma. The secretive Tok’ra are running out of hosts, and Jacob believes he’s found the answer — but it means O’Neill and his team must risk their lives infiltrating a Goa’uld slave breeding farm to recruit humans willing to join the Tok’ra.

It’s a risky proposition, especially since the fallout from Euronda has strained the team’s bonds almost to breaking. If they can’t find a way to put their differences behind them, they might not make it home alive …

Order the book now at Amazon.com or Amazon.co.uk and support GateWorld with your purchase. The book can also be purchased at the publisher’s official Web site, StargateNovels.com, and will appear in selected U.K. bookstores in the weeks to come.