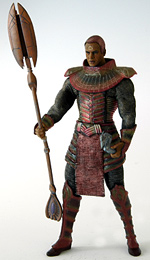 GateWorld continues our on-going Q&A with Stargate action figure creator Diamond Select Toys, with questions submitted by readers at GateWorld Forum! We’re now taking questions for the next round, so visit the forum if you have a question you don’t see answered here — or in Part 1, Part 2, Part 3, or Part 4.

Reader questions appear below in bold. Our thanks to Chuck at Diamond Select for taking time to answering these questions!

Why did DST create wave 1 with no knee articulation? What was the rush? If, as DST alluded to, the knee articulation will come with wave 2, why couldn’t they have pushed back the release of wave 1 to get it right?
Action figure design and production are an on-going evolution. We and the folks at Jean St. Jean Studios have been working to improve the figures and find a mix between a clean look of the figures and the articulation, and as we moved along we thought we had a way to satisfy both when we completed series 2.

The thought of an exclusive mail-away “Elite Jaffa” delights collectors — cutting into products horrifies them. You must be aware of this. Is there any other way of receiving this figure without cutting up four products?
Nope, sorry. That’s kind of the idea — like old school Kenner mail-always, the package must be sacrificed. SORRY! I have heard of people trading with others that might have doubles from opened packages.

How soon might we see the Desert Camo boxed set?
It’s not on any current schedule.

Are the faces for the figures free sculpts or are they based on laser scans?
Series 1 and 2 are based on scans. Series 3 (except Daniel) are free sculpts.

How have sales been on the SG-1 figures so far? Good? Bad? Have they met expectations? Exceeded them?
Sales on series 1 are very solid. They are at least at our expectations and response has exceeded our expectations.

With the cancellation of Stargate SG-1, do you intend to continue the Stargate action figure line?
It was not cancelled as much as not renewed. They have already announced two DVD movies and the renewal of Atlantis. We have no plans to slow down!

Why did you decide to eliminate the vest from the Off-World Daniel figure? Was it because of cost issue or something else? And now that this happened, will the series 2 figures come with a vest and with the proper accessories?
It was more a communication issue with the factory than anything else.

I have noticed since buying the FCBD that the knee joint doesn’t exist. This seems a major problem, as is his inability to hold a P-90 (I have to have him holding it at 45 degrees to the correct angle, so he can only hold it at his waist). To correct this will there be several hands like the enterprise models, and will the articulation be modified for more maneuverability (such as the elbows being 360 degree rotation)? And will something similar be featured for the Serpent Guard so he can hold the staff weapon in two hands?
Series 2 has added knee joints. There are currently no plans for extra hands, BUT we’ll do all we can to make sure they can hold as many as possible.

Camouflage versions (both woodland and desert) of both Jack O’Neill and Daniel Jackson were shown at Toy Fair this year. No U.S. retailers chose to take any wave 1 variants as exclusives, which is why I assume these weren’t released with wave 1. However, Forbidden Planet in the U.K. has a couple of camo versions of these figures available for presale on their Web site. So are these figures going to be released in the U.K.? If so, are there any plans in the works to get these released in the U.S. as well?
These are not currently scheduled for the U.S. or U.K. so FP will not be filling those orders.

Will you please provide us a photo or photos of how you and your folks were able to get Jack to hold his P-90? We’ve tried and, to a person, the versions we have seem very difficult, if not impossible, to have him hold the gun correctly.
[See right — Editor]

Why didn’t Black Ops O’Neill ship with the four other wave 1 figures?
They did ship from the factory at the same time. Perhaps this is a localized problem?

Why didn’t we get to see any mock ups of Mitchell at San Diego Comic Con?
The face was not where we wanted it to be for use at such an important show.

Will Carter’s hat be removable, and is there a chance that Teal’c with hair will be done wearing the standard green field uniform in the future? (Excellent face sculpt on Teal’c, by the way!)
The baseball cap is not removable. No plans right now for that Teal’c — glad you like him!

Does the Teal’c Jaffa warrior figure come with a serpent helmet?
Nope.

Is Jonas Quinn being considered for release in a future wave of SG-1?
Believe it or not, he has been mentioned around the office.

Thanks for announcing that you are going to do Colonel Mitchell and Vala Mal Doran. Will Generals Landry and Hammond be added to the assortment, completing the core main characters from SG-1?
We’ve discussed both — we’ll have to see if the opportunity presents itself to produce them.

I recently saw pictures of the Anubis figure, so is there any chance we’ll see Apophis?
Not currently on a schedule BUT very possible in the future.

Any news yet on the contents of wave 4? When can we expect it?
We’ll announce the line-up when series 2 is in stores.

Is there any update on the possibility of the Atlantis characters following SG-1 as figures?
We’re going to do Atlantis we PROMISE — and soon.

Will the black ops figures have the hats sculpted on, or removable?
Sculpted.

Are there any plans to release a Zat in the open position for the Stargate figure series? (The current Zat included is in the closed position).
We’ve thought about it, so MAYBE!

Any chance of a weapons and tool accessory pack — generic tools and equipment used by the characters, a staff weapon, tactical vests, G.D.O.s, P90s, water canteens, knives, etc.?
Sorry, nothing like that is planned.

Is there a possibility that an accessory kit might be released that includes a number of Replicators and Jack’s Replicator weapon?
Sorry, nothing like that planned.

When will wave 2 officially be available? Wave 3?
Wave 2 should be in stores VERY soon, before end of the year we hope. And series 3 in the spring.

Can I find Stargate figures in stores and not online?
ALL comic stores can get you figures. Tower had series 1 and Suncoast/FYE will have series 2. If there is a store you frequent that does not have the figures, by all means go in and tell them you want them!! Lots of stores we deal with don’t THINK they have customers for product like this.

Will the figurines be available at regular toys stores here on the East Coast — stores such as Toys R Us or KB Toys — or just comic book stores?
Currently KB and TRU don’t think there is enough interest to stock the figures — see above.

Will they be available for purchase at conventions?
Chances are good, but that’s up to the dealers that set up at the shows.

Will you be offering each assortment as a packaged set besides the individual figures?
We do stock a limited number of sets of the core asst on our Web store for each release.

Can you post up at your site where these figures will be available online besides your site?
It’s pretty much comic stores and Suncoast — see above.

While direct marketing retailers can pre-order the figures through the Previews network will you be offering pre-orders on your site?
We do not currently allow pre-orders on our site as a way to encourage support of online retailers like New Force, Time and Space, and Action Figure Express.

While you do not sale overseas, will overseas retailers be offering the figures through their respective outlets and if so which ones where?
We have distributors in many countries including, the EU and Australia. For other countries support is a little thin — if you want the figures tell the retailers. DST is going to take all the orders we can get!