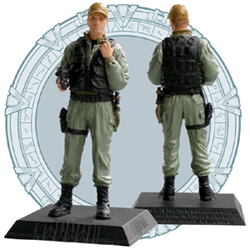 Pewter figurines are the newest offering in the world of Stargate merchandise. Phoenix Icons, a British company, has created a line of fully licensed Stargate SG-1 and Stargate Atlantis figurines, now available online. Crafted at 1:25 scale (85mm, or about 3 1/3 inches tall), the figurines are hand-painted, which allows for more attention to detail.

There are also two Jaffa warriors, one with gold/silver armor and the other with crimson/silver armor.

Teal’c, in an olive uniform, is available as an exclusive when purchased in a four-pack that includes the olive-garbed Mitchell, Carter, and Jackson. Each figurine, except for Teal’c, is also sold individually.

“We are based in the U.K. and currently selling direct to U.K. fans,” Phoenix Icons told GateWorld, “but we are looking to sell to the U.S.A. soon.”

(Thanks to Daniel Aleksic for the tip)