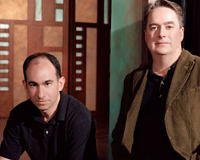 Stargate executive producers Brad Wright and Robert C. Cooper are officially on the record regarding the third live-action television series, now in the early concept phase. The two talked about the new series in interviews at MGM’s official Stargate Web site.

“That’s definitely in the works,” Cooper told the site. “It’s something the studio is very actively pursuing. We have a concept that we’ve come up with. … We’ve talked at length with the studio about what the concept is for it.”

The idea currently on the plate could be turned into a feature film, Cooper noted. “We came up with an idea that we thought would be a great Stargate feature that really was a separate, third entity to the two existing series,” he said. “It’s entirely possible that we’ll turn that into the third series. I can’t really say too much about it right now. But like Atlantis, it maintains the spirit of Stargate but at the same time opens up a whole new universe.”

Whatever the third series looks like, it will maintain the key ingredients that make Stargate what it is, Wright said — which may preclude the possibility of a show set in the distant future.

“It’ll have the same flavor as Stargate SG-1,” he said. “… It’s the approach to the storytelling that I think makes it unique, and that makes it Stargate. And that’s that it has a sense of humor, and it’s people from our time going on these adventures. It’s not set in the future. … I think that’s what makes it unique, and I think that’s what a third series would have to have for it to succeed.”

And just when can sci-fi fans hope to see the next generation of Stargate? “The ballpark at this point is to have something in active development by the summer,” Cooper said, noting that by that point the preliminary work on the two Stargate SG-1 movies will be done, freeing up some of the producers’ time. If all goes well, it will also give the studio the time to finalize financing. “Hopefully by then everyone will have their ducks in a row with money. … The goal would be to have it on the air sometime in early 2008.”

Stick with GateWorld for the latest about Stargate‘s next spin-off show!