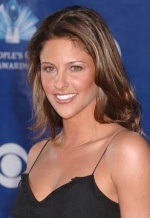 Jill Wagner, perhaps best known for her role as Krista Starr in the short-lived Blade TV series, will step up for a prominent role in the fourth season of Stargate Atlantis, executive producer Joseph Mallozzi recently revealed in a post at his blog.

Wagner will play Larrin, the leader of an unnamed, technologically advanced race who set off from their Wraith-stricken planet in a generational ship. When Larrin and her people capture Colonel John Sheppard, they hope to convince him to use his Ancient gene to aide their cause.

The 28-year-old actress was born in North Carolina, and has also appeared on such series as Monk and Dr. Vegas.

Larrin’s race will be introduced in “Travelers,” expected to air as the fourth episode of Season Four. They are meant to be a recurring “wild card” for the Atlantis expedition, as their allegiances may swing in many different directions.

“Travelers” goes before cameras soon, and will air this fall on The SCI FI Channel in the U.S. Stick with GateWorld for the latest on this episode and the rest of Season Four!