Perhaps it is a foregone conclusion that a site devoted to Stargate is going to give a ringing endorsement to one of the shows when a new season arrives on DVD. Stargate Atlantis is one of our favorite shows on television — so let’s grant the fact that any Atlantis fan ought to own this set … unless you don’t like rewatching episodes. And that would be just nutty.

MGM and Fox certainly kept fans waiting for Stargate Atlantis: The Complete Second Season ($49.98 – Region 1). Season Two finished its run on cable in March of 2006, and eager viewers — including us — expected a fall release, in keeping with the show’s first season. Instead, the studio and its new distributor (Fox took over Stargate‘s DVD releases from Sony late last year) pushed the set back to March 6, 2007 — with Season Three now half over on cable, and fans wondering when it will be available to buy.

But the long wait is finally over, and as the addage indicates, good things have come. It is difficult to find a flaw with this 5-disc release, which includes all 20 episodes in 1.78:1 anamorphic widescreen video with a crisp, 5.1 Dolby surround sound mix. Frankly, with all due respect to SCI FI Channel and other broadcasters, this is the way the show’s creators meant for fans to watch the show. Here Colonel Sheppard, Dr. Weir, McKay, Ronon, Teyla, Beckett, and the rest of the expedition are in their full glory.

THE SHOW
Look no further than GateWorld’s ratings summary to see what we and other fans thought about each individual episode. Season Two capably wraps up the multi-episode arc on which Season One went out, with “The Siege, Part 3.” It has great action and visual effects, as writer Martin Gero pulls out all the stops to save the city from the Wraith onslaught. 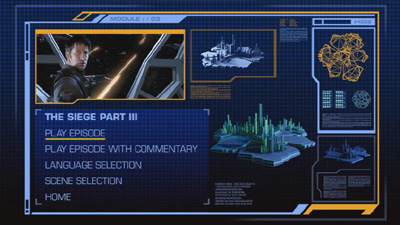 Robert C. Cooper’s “Runner” is an important episode for the franchise, introducing new series regular Ronon Dex (Jason Momoa). “Duet” will always be a fan favorite — if for nothing else than for the infamous kiss — and David Hewlett (“Rodney McKay”) turns in a terrific performance as a man with multiple personalities.

The “Lt. Ford on Wraith steroids” storyline contributes to four very solid episodes in the first half of the season, but by its conclusion it is difficult to see it as much more than an extended farewell to one of Season One’s main cast members (guest star Rainbow Sun Francks).

Despite the overall strength of the season, there are some episodes late in the season that … well, I wouldn’t pick first on a lazy Saturday afternoon. “The Tower” feels like a kernel of a good idea buried under a hill of cliches, but finds a bright spot in the excellent guest star Peter Woodward (Crusade). “Grace Under Pressure” is a fun “McKay-in-a-Box” crisis, but shows us that finding the McKay-Carter spark from SG-1‘s “48 Hours” and “Redemption” is as difficult as catching lightening in a bottle. And “Critical Mass” — notably, much higher rated by GateWorld readers than by the editor — has some nice character moments, but can’t shake the feeling that the first half is an SG-1 episode which awkwardly does not include any SG-1 team members.

The show’s over-arching stories take several steps forward in Season Two, including Dr. Beckett’s (Paul McGillion) development of a retrovirus that can transform a Wraith into a human being. This creates the entry point for several stories, from “Instinct” and “Conversion” to the pivotal “Michael” late in the season. It is in this last episode that Atlantis (helped out by A-list guest star Connor Trinneer, Charles “Trip” Tucker on Star Trek: Enterprise) shows what it is truly capable of: a layered character study with deep ethical quagmires, which helps to give the Wraith a much-needed third dimension, and — quite literally — a human face.

AUDIO / VIDEO
I won’t pretend to be an A/V expert — there are plenty of other DVD sites reviewing Stargate Atlantis that can give DVD-philes a better evaluation of things like video transfer and channel mixing. I will say that, after watching it on television for a year, it’s easy to forget how good a show like Stargate Atlantis looks on DVD. Season Two’s 20 episodes have a crisp picture and bright colors, and are obviously going to give viewers a noticable improvement over television viewing, those fuzzy VCR copies, and even TiVo. 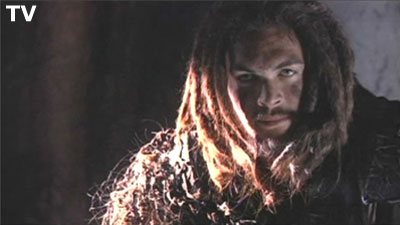 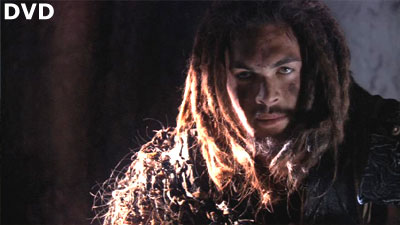 MENUS
Each disc’s menu system is designed well, without excessive motion, animation, or flashiness. The design is inspired by the city of Atlantis’s Ancient console interface, with “picture-in-picture” style clips to remind you what each episode is about. (Not everyone can rattle off a plot summary after they see just an episode title!)

The menus are in widescreen, and — a great improvement over earlier SG-1 releases — include that helpful “Play All” option. 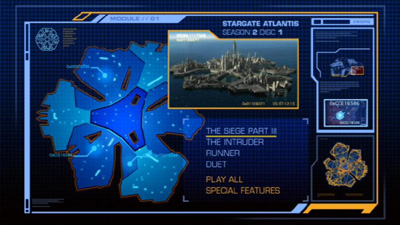 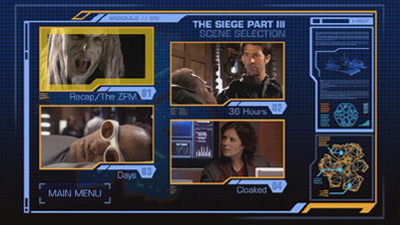 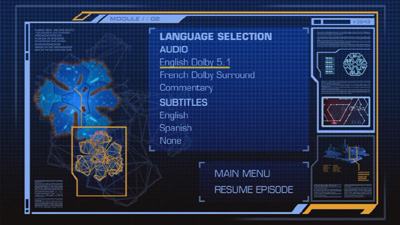 BONUS FEATURETTES
DVD-lovers would be hard-pressed to find a TV series that offers as much bonus material on DVD as does Stargate. Audio commentaries for every single episode are virtually unheard of, yet Stargate‘s creators have been recording them for fans for years. In addition to commentaries and photo and production design galleries, eight video featurettes are spread out over Season Two’s five discs: 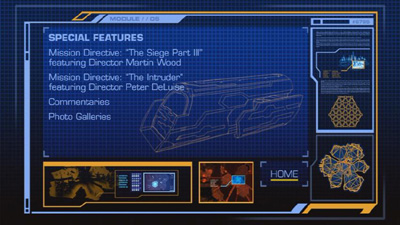 The actor behind the “cowardly lion” Carson Beckett is fully in his game in the 20-minute-plus piece covering Paul McGillion. Paul discusses his origins in Scotland, convincing his parents that he had not been hired on Star Trek, and his relationship with David Hewlett both before and after “Duet.” Paul also discusses “The Siege, Part 3,” “Runner,” and “Conversion,” among others. Writer Martin Gero is also interviewed.

The 20-minute mocumentary “Road to a Dream with Martin Gero” explores what happens when an innocent writer turns into a carnivorous, wannabe actor. Gero plans to play Danger Beckett, Carson Beckett’s more attractive younger brother in “Coup D’etat,” an episode he penned. He works to pick up a Scottish accent, and proposes that in seven years he will be an Academy Award winner. Executive producer Brad Wright, director Martin Wood, and the core cast contribute to the gag. Rachel Luttrell’s (“Teyla”) reactions are priceless in this piece.

Like all Stargate DVD boxed sets released to date, there is a noticeable absence of deleted scenes and a gag reel. These two items, statistically, are what DVD owners demand most often. Granted, some celebrities do not wish incorrect or inaccurate material (i.e. them goofing around) to be presented to their viewers. However, Stargate Atlantis is a series where scenes are deleted all-too-frequently due to network time constraints, and having them not presented to fans post-TV (or even reintegrated into the shows in producer’s cuts) is disappointing.

AUDIO COMMENTARY
Select commentaries reviewed include “The Siege, Part 3,” “Duet,” and “Grace Under Pressure.” Each covers the full length of the episode, and some extend into the credits. All are a balance of inside jokes, casting experiences, individual moments on set, and general crewmember banter. It is quite obvious that the cast and crew of the show enjoy spending time with one another, and these commentary tracks not only give added value to rewatching episodes from years gone by — they also give fans of the show another glimpse of the world behind the scenes.

Martin Wood, director of the premiere, is not afraid to reveal camera mistakes in plain daylight, and he does on more than one occasion with conviction. Joe Flanigan (“John Sheppard”) explains that he doesn’t let the role of Sheppard go to his head. In fact, when he returned to the set for a second year he had literally forgotten the situation in which his character had been left in the previous season’s cliffhanger.

It is clear that the panels for these commentaries are meticulously thought-out. The panelists do not talk over each other too frequently, and all sound considerate of each other’s time during the experience. The audio is superb and preserves the full range of frequencies, from whispering to laughter.

EXTRAS
The disc’s packaging continues the new slimline-style boxed set, with three thin snap cases holding a total of five dual-layer discs (two in the first two, one in the third). This is just the same as your first season set of Atlantis, and also matches the new Stargate SG-1 slimline packaging.

Subtitles are available on these discs in English and Spanish.

CONCLUSIONS
Overall, the team at Stargate managed, one more year, to knock another one out of the park. Interview backgrounds are well thought-out and tiled overlays are kept interesting with Stargate-themed graphics. As with previous season sets, the profiles are expertly filmed with experienced technicians. The commentaries are exceptional, the profiles are lengthy and packed with fun and fascinating footage, and the menu openings are shorter this year than last — allowing you to get to your desired episode quicker than before.

Stargate Atlantis: The Complete Second Season is an obvious pick-up for die-hard and even casual fans of the Stargate franchise. For more casual fans who may have only occasionally caught the show on TV, the low sticker price (online and discount retailers such as Amazon.com make it easy to find the $50 set for well under $40) and beefy extras also make it a winner.

The sophomore year of any television show is bound to have its ups and its downs, and Stargate Atlantis is no exception. The young show continued to try and find its footing, made some significant cast and story changes, and ended up a better show at episode 220 than it was at 201. The writers replaced Aiden Ford with Ronon Dex, who is clearly a stronger presence and a welcome addition to the characters’ dynamic. They reconnected Atlantis with Earth, avoiding the chance that the show would always be fundamentally defined as Stargate‘s answer to Star Trek: Voyager. And they finally made the Wraith into 3-dimensional foes not only by doing new and interesting things with them — as in the tenuous alliance that takes place in the season finale, but more importantly by introducing a new recurring character: Michael, who promises to come into his own in Season Three.

Many successful shows seem to come into their own in the third season (look no further than Star Trek: The Next Generation), and Season Two leaves the show with a nice jumping-off point to that all-important year. Kudos to MGM, Fox, the cast and crew of Stargate Atlantis, and DVD features producer Ivon Bartok for assembling another great addition to any science fiction fan’s library.