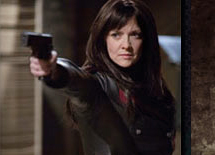 The next evolution in entertainment has been unveiled at SanctuaryForAll.com, where a fully-interactive Web site is gearing to usher fans into a unique viewing experience. In anticipation of Sanctuary‘s premiere, starring Amanda Tapping and Christopher Heyerdahl (among other Stargate greats), fans the Web over now have a glimpse into what the full experience will offer.

Being billed as an Internet-based episodic series with “stunning visual effects, video game technology and cutting edge web design,” the concept incorporates a unique navigation interface with patent-pending technology which will allow users to share an interactive series over distance like never before.

The revamped Web site can now accommodate the series, but extras are already available. A brand new high definition trailer can now be downloaded. In addition to banners, blogs and a forum, the site now sports green screen video clips, encouraging fans to get a jump-start on creating their own content

Fans have plenty to sink their teeth into until the launch of the premiere in May. GateWorld salutes the efforts of the new series, and will stay abreast to bring you the latest. Until then, visit SanctuaryForAll.com!