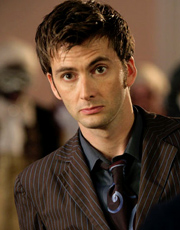 The SCI FI Channel will continue running the hit BBC series Doctor Who with Season Three, the U.S. cable network announced today. The new run of episodes will start this July, starting with the 2006 Christmas special “The Runaway Bride” before Season Three begins with “Smith and Jones.”

“We were delighted and honored by the second series’ success, and we can promise new thrills, new laughs and some terrifying new aliens,” executive producer and head writer Russell T Davies said. “The Doctor and Martha are destined to meet William Shakespeare, blood-sucking alien Plasmavores, The Judoon — a clan of galactic stormtroopers –– and a sinister Dalek plot in 1930s New York.”

Doctor Who has performed well for SCI FI as an acquired series, averaging more than one million viewers per episode.

“The Runaway Bride,” which picks up moments after the tear-jerking conclusion of Season Two, guest-stars award-winning comedy actress Catherine Tate.

The new season is currently airing every Saturday night on BBC One in the United Kingdom. The fifth episode of the 13-episode season, “Evolution of the Daleks,” premieres this weekend.