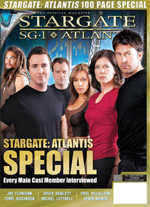 Titan Magazines, the publisher of the Stargate SG-1 / Stargate Atlantis: The Official Magazine is offering a trip for two to the set of Stargate Atlantis in the newest issue (#15, March/April 2007)! The entry deadline is April 25, 2007.

The winner and guest will be “flown to Vancouver and treated to a behind the scenes tour of the Stargate Atlantis set,” according to the magazine. “Ten runners-up will receive a copy of “Stargate SG-1: The Ultimate Visual Guide” from DK Publishing and a Stargate Atlantis Season Two DVD box set.”

The SCI FI Channel in the U.S. will air the final 10 episodes of SG-1 Season Ten and Atlantis Season Three — including guest appearances by Richard Dean Anderson in “The Shroud” and “The Return, Part 2” — starting Friday, April 13!