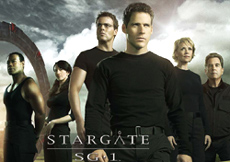 The first Stargate direct-to-DVD movie won’t arrive until the first half of 2008, Twentieth Century Fox tells GateWorld. MGM originally hoped to have Stargate: The Ark of Truth out this fall.

The visual effects-heavy film is currently in post-production.

The Ark of Truth will wrap up the two-year Ori story arc, which was left unresolved when SG-1 finished its tenth and final season on television this month.

The second direct-to-DVD movie, Stargate: Continuum, has likewise been bumped to 2008, following The Ark of Truth. Principal photography on the second movie recently concluded in Vancouver.

Murmurs of additional movies are already being discussed. If the first two are successful, MGM hopes to release about two SG-1 movies per year. “There is already talk of doing some more of these SG-1 movies,” actor Michael Shanks recently wrote in his TV Guide blog, “so keep your finger’s crossed.”

With Stargate‘s traditional production schedule running from March to October, MGM may greenlight an additional film — or at least commission a script — before The Ark of Truth reaches store shelves.