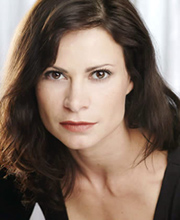 After five years away from the Stargate universe, actress Jacqueline Samuda will make a return appearance in the upcoming film Stargate: Continuum. Samuda’s official Web site announced recently that Samuda will reprise her role as the power-hungry Goa’uld Nirrti in the movie.

Continuum is the second of two direct-to-DVD movies that follow SG-1‘s final episode, and is filming now in Vancouver, B.C. In the movie, SG-1 must deal with a temporal paradox of huge proportions when the Goa’uld prevent SG-1 from ever forming.

SG-1 first met Nirrti when she travelled to Earth to represent the Goa’uld System Lords alongside Cronus and Yu in Season Three’s pivotal episode “Fair Game.” Always seeking to engineer an advanced human host body, the Hindu goddess was killed off in the sixth season episode “Metamorphosis.”

Continuum and Stargate: The Ark of Truth are expected to be released on DVD this fall. The last episodes of Stargate SG-1 air Fridays this month at 8 p.m. Eastern/Pacific on SCI FI Channel in the U.S.

(Thanks to AnnaC for the tip!)