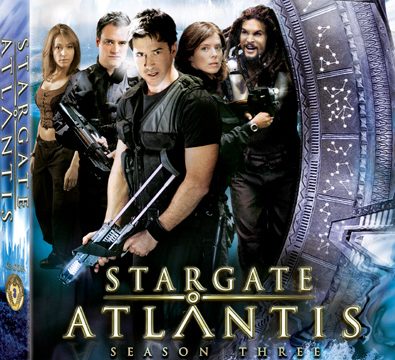 The third season of Stargate Atlantis arrives on DVD September 18 in North America (Region 1)! The 5-disc set is now available for pre-ordering at Amazon.com for just $32.49 — 35 percent off the suggested retail price of $49.98 (subject to change).
(Story continues below)

As previously reported (story), the set will include all 20 episodes, with audio commentaries and the following bonus features:

Pre-order Season Three now at Amazon.com and support GateWorld with your purchase!

On the Stargate SG-1 front, FOX tells us that Stargate SG-1: The Complete Tenth Season (coming July 24 – pre-order) will come in special metallic foil packaging with a three-dimensional, embossed Stargate. The company wanted to do something special to mark the end of television’s longest-running cable drama.

MGM and FOX will also host two special discussion panels at next month’s San Diego Comic-Con, one featuring the cast of Stargate Atlantis‘s fourth season and the other with the cast of the 2008 DVD movie Stargate: The Ark of Truth.