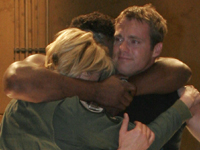 Beware of minor spoilers for “Unending,” the final episode of Stargate SG-1, in the story below.

After ten years and numerous rumors that the show wouldn’t make it to its next season, Stargate SG-1 co-star Michael Shanks is satisfied with the way the show finally went out. The actor talked about the series finale in a recent interview with GateWorld.

“It’s hard to be terribly upset about [the cancellation] because we’ve had such a wonderful run,” Shanks said. “I’ve been through so much with the show that as much as there are people out there that believe the show can go on forever, there’s always the question of ‘What territory haven’t we discovered? We haven’t we gone over?’ We’ve gone over so much. Part of me felt strangely satisfied and relieved that we were done, because we were going off on such a high note.”

In the series finale, “Unending,” Shanks and co-star Claudia Black (“Vala Mal Doran”) had the opportunity to explore one big, lingering question: What if their characters finally became romantically involved? The plot point resulted in a startling moment of confrontation in which Daniel goes on a verbal tirade against Vala.

“He understands the animal that she is,” Shanks said of that particular scene. “There’s always been this underlining, keeping her at arms length because of the fear of getting too close. … But they’ve never dealt with each other in a head-on kind of way. We’ve never seen her truly vulnerable to Daniel, and we’ve never seen him be absolutely truthful and direct in terms of is own baggage that he carries in relationships, as well as what she represents to him.”

Why was Daniel so mean to Vala in the scene? “I think that there’s an innate testing that’s going on through the course of that, and he’s expecting a certain response,” Shanks continued. “He’s expecting a more sort of playful, more sort of ‘How dare you’ [response]. He’s expecting her walls to go up, because it’s almost like a poker match. He’s waiting to see if she’s going to be vulnerable first before he is — and because she’s so vulnerable, and he didn’t expect it, that we see that resolution, that turn around with him.

“It is a test, but I don’t think he was expecting it. That’s the genuineness of it. When he sees her actually hurt, he’s actually mortified himself that he’s taken it so far.”

Shanks also shared his thoughts on his year off, during the show’s sixth season, and how that has impacted his experience on SG-1.

“It feels like two chapters,” he said. “It truly does. I knew that at the time, on how I felt, that it was time to go, at that point, when I left the show after Season Five. When I came back it was a different environment. I felt really good to be back on the show, and it felt really good to tell the stories that we were telling at that time.

“It was nice to have that break. I think for Christopher and Amanda, who didn’t get the chance to have that time away, I think they suffered more fatigue the further we went along. And for me I was a lot fresher when I came back. It was nice, but it does feel like there are two separate stories there. Two separate series.”

The actor remains deeply proud of Stargate and grateful for the unrepeatable experience it gave him as a young actor. “I felt proud of the show. It wasn’t this empty feeling that some shows would get [upon cancellation]. We knew that we were finishing the season. We knew there was a potential for these movies, which are now happening. So we felt pretty good about it overall. We’ve had a nice, lovely run, and we’re ready to move forward.”

Don’t miss GateWorld’s complete interview with Michael Shanks! The first SG-1 direct-to-DVD movie, Stargate: The Ark of Truth, will be released in the first half of 2008.