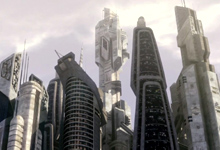 Stargate Atlantis and Dr. Rodney McKay were big winners on June 10, when the winners of the fifth annual Spacey Awards were announced. Administered by Canada’s SPACE Channel, the Spaceys are Canada’s only science fiction and fantasy TV awards. The movie awards are voted on by the staff at SPACE, but the TV awards are viewers’ choice.

Stargate Atlantis, with 37 percent of the viewer vote in the Favorite TV Show category, easily defeated its nearest competitor, Battlestar Galactica, which earned 26 percent of the total vote.

Complete results in other categories, such as Favorite Classic TV Show, can be found at Spaceys.ca. The season finale of Stargate Atlantis airs this Friday, June 22, at 9 p.m. Eastern/Pacific on SCI FI Channel in the United States!

(Thanks to Andrea D for the tip!)