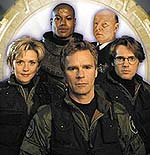 For ten years, Stargate SG-1 enthralled us with their adventures, and ended its record-breaking televised run while still continuing to put out high-quality, endearing, irreverent, and groundbreaking episodes and characters.

With the franchise at a transitional point (SG-1 now making straight-to-DVD movies and Season Four of Stargate Atlantis just a month away), Sci-Fi Weekly sat down with Amanda Tapping, Christopher Judge, and Michael Shanks to get their views about SG-1‘s run, their time together, and the future.

When asked if she thought the timing was right to end Stargate SG-1, Amanda Tapping said, “In some ways, yes, I do. It was weird for us, because every year we thought we were going to be canceled, and they kept bringing us back. This year I had another year on my contract, so I was like, ‘Oh, well, for sure it’s coming back for another season.’ Then we all individually got called into Rob Cooper’s office where he said, ‘The show has been canceled.’

“We all knew we’d hear those words one day; you have to, it’s inevitable,” she said. “We’d had a decade-long run. But now that we’re just doing the movies, it does make sense. We’re having a lot of fun doing them, and I think, yeah, in some ways [the series] ran its course. Ten years is a good run.”

With Tapping moving on to Atlantis for Season Four, the question arose as to whether it was fair to say she still loves Stargate. “If it weren’t fun, then I wouldn’t still be here,” she said. “It’s an amazing gig. It’s kind of an embarrassment of riches for me at the moment.”

For Michael Shanks, the long run of Stargate SG-1 was all about family.

“There is a tremendous family aspect to this show,” he said. “I met my ex in the first season of the show, and my current wife actually came on as a recurring character later on. Ten years of doing anything is a long time, and we have evolved so much as people. I was a single guy who had just turned 26, and I’m turning 37 this year … now I’m married and I have three children, one of which is eight and has grown up with the show in her life.”

While fans would love to continue to see Shanks involved in the Stargate universe, he’s not entirely sure as to what the future holds. “In terms of what my involvement will be — I directed, I wrote and whatnot, but the people that have been here for so long are looking to the future and looking to do other stuff … whatever happens with us in this realm, I think it will be on a part-time basis. We will have to wait and see.”

Christopher Judge attributes the success of Stargate SG-1 to, among other things, good timing.

“Let’s face it,” he said. “In 1997, the Star Trek franchise was dying out, The X-Files had peaked and was on its way down, and we happened to come along where there was a gap in programming. There was the right formula, there was a movie that had been successful and that could be expanded on, and you have MacGyver and three other mooks.

“And then you have a guy like Brad Wright, who already had success with The Outer Limits, and all the pieces fit; the timing was right and it just all worked. And we were lucky enough to grab a fan base.”

When asked about his favorite storylines, Judge noted that he loved the episodes in which kids are involved — but mentioned a specific storyline from the show as a whole as one of his favorites.

“I think our definitive show was “Heroes”. I think ‘Heroes’ probably captured the true essence of what the show was about from the humorous aspect, from the human aspect; the battle scenes and and stuff were just absolutely feature-quality, and the effects were feature quality,” he said. “You can’t afford to do a show like that every week, but I think that so encapsulated everything that encompasses Stargate.”

More questions and answers are available in the full interview at Sci-Fi Weekly’s Web site.

And make sure to keep watching GateWorld for the latest breaking Stargate news!

(Thanks goes to Morjana for the tip)