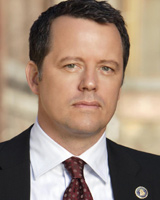 Culp is a veteran actor of stage and screen. He played Robert F. Kennedy in the Kevin Costner film “Thirteen Days.” On television he played Rex Van De Kamp on Desperate Housewives, and Special Agent Fred Chambers on ABC’s Traveler. He has had recurring roles on JAG, The West Wing, 24, E.R. and many others.

Science fiction fans will recognize him as Major Hayes, head of the M.A.C.O.s tactical unit, in the third season of Star Trek: Enterprise.

In the episode, Rodney McKay and his sister Jeannie (guest star Kate Hewlett) are kidnapped by Henry Wallace, the head of a medical technologies corporation that the U.S. government uses to integrate alien technologies procured by the Stargate program into Earth-based medicine.

It is not yet known what character Culp will play, but as a featured character in the episode Wallace is a good bet.

“Miller’s Crossing” is expected to air as the ninth episode of Season Four, which premieres September 28 on SCI FI Channel. Visit GateWorld’s episode guide for more!