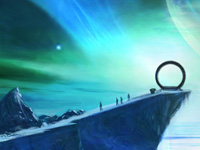 In anticipation of the launch of the Stargate Worlds MMO sometime next year, the team at Cheyenne Mountain wants you to take a 2- to 3-minute survey about the Stargate franchise and MMO games.

Following the survey, fans will have the option to select several bonuses, including a chance to win a Stargate Worlds poster signed by the entire development team, and/or a chance to be a beta tester for the game!

Take the survey now! Stargate Worlds is currently in production for a 2008 release. Visit the game’s official site at StargateWorlds.com.