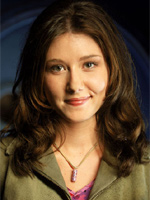 Beware of minor SPOILERS below for the upcoming fourth season of Stargate Atlantis.

Renowned actress Jewel Staite joins the cast of Stargate Atlantis this season as Dr. Jennifer Keller, the expedition’s new chief medical officer. But who is Jennifer? GateWorld recently sat down with writer-producer Carl Binder, who had the opportunity to flesh out the new character in the Season Four episode “Missing.”

“It’s another action [piece], but also [a] character piece with Teyla and Keller being isolated on a planet,” Binder said. “It’s kind of like a Survivor episode. The two of them against an enemy that’s pursuing them.

“It’s fun because Keller is the new doctor on the show, and her character is introduced at the end of Season Three. We see her in ‘Adrift’ and ‘Lifeline’ and ‘Doppelganger’ and throughout, but this is a chance for us to really explore her character, find out about where she’s from, who she is, and what her character is. And so it was fun to explore that character in juxtaposition to Teyla.”

In the episode, Dr. Keller joins Teyla on a trip home to New Athos, where her people resettled after the Ancients moved them off of Atlantis’s planet (“The Return, Part 1”). But they find the Athosians missing, and are soon on the run from a race of primitive warriors in the forests of New Athos.

“Keller is the small-town girl, completely out of her element in this forested planet being hunted,” Binder said. “And Teyla is the warrior who is perfectly at home in that environment. It proved to be a lot of fun.”

Keller was introduced in the Season Three finale, “First Strike.”

Since “Missing” is the first episode to give Keller’s character serious attention, Binder drew the lucky straw to be the one to make some decisions about her background.

“You start thinking, is she an only child? Where is she from? Which city? … And also, her first name. We went through so many names for her. She was introduced as Dr. Keller mainly because we could not clear a first name. Because that’s what we have to do on all these shows is get legal clearance to be allowed to use a name. So she was originally Stephanie Keller. We just went down a whole list. Natalie. None of them cleared. Finally, it ended up being Jennifer. So Jennifer Keller it is.

“Missing” is expected to air on November 9 as the seventh episode of Atlantis‘s fourth season, which premieres Friday, September 28 on SCI FI Channel in the United States. Learn more about this and other episodes in GateWorld’s episode guide! And stay tuned for GateWorld’s complete interview with Carl Binder.