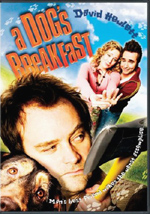 “It’s coming out the week the baby’s due,” he says of his movie. “I hope both releases go well. Mars [his dog] is already looking nervous.” And the baby’s gender? “Not a clue. We’re strangely old-fashioned that way. Everything else we’re as hi-tech as we can go, but we don’t want to know until we know.”

Hewlett admits that 20th Century Fox, his movie’s distributor, has brought him nothing but joy. “They’re the coolest people on earth,” he tells us, “and truly the funnest group to party with at Comic-Con. They put these great little promo cards in with Season Ten of SG-1, and apparently SG-1 Season Ten is in their top 20 sellers. No surprise.”

Jane Loughman, producer of “A Dog’s Breakfast” and Hewlett’s fianc‚e, was responsible for assembling the extra features in the DVD. “Jane used to do this for E! and Entertainment Tonight,” Hewlett says. “Now she gets to put those skills to good use and put together this behind-the-scenes stuff. I was blown away, myself. I think, certainly for the Stargate fans, they’re going to get a kick out of it. The Stargate fans are going to see all of the familiar faces in some very different lights. I can’t wait.”

David tells us that “between reading the new Harry Potter and baby classes” he is currently penning his next magnum opus, “Design of the Dead.” We will be bringing you more on this new project very soon.

Hewlett applauds online fandom for staying caught up with the times. “This is why I love things like GateWorld,” he says. “Stargate is the perfect place for the Internet. The fans are savvy on that stuff. They’re miles ahead of where we are. They’ve just been so supportive of this stuff. And I think they’re going to like this DVD.”