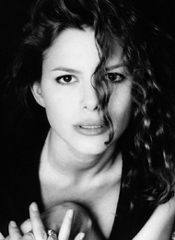 Beware of minor SPOILERS for Stargate Atlantis‘s “Outcast” in the report below.

Actress Kari Wuhrer will guest star in the upcoming episode “Outcast,” executive producer Joseph Mallozzi told fans at his blog yesterday. Wuhrer will play Nancy, John Sheppard’s ex-wife, with whom he is reunited during a trip home to Earth.

Forty-year-old, Connecticut-born Wuhrer will be most recognizable to science fiction fans as Maggie Beckett from the final three years of Sliders, which aired on FOX in the United States before moving to SCI FI Channel. Since then she has also appeared in CSI, CSI: Miami, and many films.

“Kari Wuhrer, who does a wonderful job as Sheppard’s ex-wife, Nancy, is an incredibly sweet person,” Mallozzi said. “She chatted with us between set-ups, was very complimentary about the script, the show, and her character, and I even overheard her offering to go down and grab some coffee for the gals in the make-up department.”

Sheppard revealed to Ronon that he had been married in the recent third season episode “Sunday.”

Also appearing in the episode is actress Emma Lahana, as Ava Granger. The 23-year-old New Zealand native played Kira Ford in the Power Rangers children’s series, and has put in guest appearances on Supernatural, Kyle XY, and Bionic Woman.

“Outcast” is currently filming in Vancouver, British Columbia. The episode is expected to air as the fourteenth episode of Stargate Atlantis‘s fourth season, on January 25.