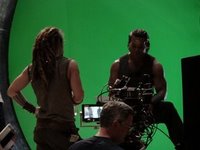 It looks as though Teal’c doesn’t mind spending time in the Pegasus Galaxy.

In addition to reprising his role as Teal’c for a cameo in the upcoming Stargate Atlantis episode,“Reunion”, show-runner Joe Mallozzi confirmed in his blog recently that Christopher Judge will also be putting in a repeat performance on the series in the episode “Midway”, to air later in the season.

Mallozzi also explained that the appearance of Teal’c in “Midway” is not just a cameo (as with “Reunion”), and that the character will be integral within the plot.

It should be noted that the look of Teal’c in Season Four of Atlantis may be different than what we have become accustomed to. In addition to the streak of gray hair he earned by sacrificing fifty years of his life to save his team in SG-1‘s series finale,“Unending”, the character is now also sprouting longer hair, almost shoulder-length.

Check out Joe Mallozzi’s blog for a look at other pictures and updates from the set.

“Reunion” is slated to air on the SCI FI Channel on Friday, October 12, with “Midway” currently set for a February 1st premiere. Stick with GateWorld for more info on these episodes as details become available!