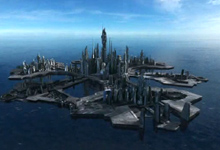 No, the broken English in the headline isn’t a typo. Like the alien Nem in the Stargate SG-1 Season One episode “Fire and Water,” millions of sci-fi fans today woke up to the question: What fate Stargate? The Writer’s Guild of America has begun its first strike since 1988, threatening to bring TV production to a screeching halt and throwing the industry into upheaval.

At issue is how writers will be paid for the new media that has emerged in recent years, changing the way that viewers watch television shows — especially DVDs and Internet services such as iTunes. Writers are also apparently none too happy about now prolific reality TV, shows that do in fact have writers, and writers who are not WGA members at that.

Networks have also regarded the online streaming of episodes on their Web sites, which usually include paid commercials, as “promotional” use — for which writers are not paid.

Though popular science fiction shows such as Heroes have already been affected (the 6-episode spin-off Heroes: Origins has been shelved, and a new ending shot to allow the mid-season finale to be aired as a season finale), others — including Stargate Atlantis — are already far ahead in the production cycle. All of Atlantis‘s fourth season has been filmed, with episodes in the second half of the season currently at various stages of post production.

But the bottom line is that Stargate Atlantis should go largely unaffected by the strike, since it is a Canadian production based in Vancouver, B.C. and its staff members belong predominantly to Canadian unions. When asked on his blog what affect a strike would have on Stargate, executive producer Joseph Mallozzi replied with a terse “None.”

Some speculate that a prolonged WGA strike in the United States could actually force networks to turn to Canada for more production.

Other shows on SCI FI Channel apparently are affected by the strike, including NBC Universal’s Battlestar Galactica — which is staffed by many Americans despite the fact that it is filmed in Canada, just down the road from Stargate. If the WGA strike doesn’t affect the production of Atlantis, it certainly could affect the show’s broadcast schedule.

With the strike officially on, networks and cable channels are busy reviewing the reality series, game shows, already-written episodes, and reruns they might use to fill in the gaps — and whether they might save some unaired episodes for a rainy day. Depending on how the rest of SCI FI’s programming is affected by the strike, a longer break between the first and second half of Atlantis‘s fourth season is possible.

How long will the strike last? While a quick resolution is not impossible, the fact that negotiations have escalated to this point indicates that both sides are prepared for the long-term. “In order to have any real impact, the strike will have to be at least as long as the ’88 strike, which lasted six months,” writer-producer J. Michael Straczynski told Usenet readers last week.

He said that writers are asking for double the residuals on DVD sales — from a flat rate of 4 cents per unit to 8 cents. This would only apply to DVDs with revenues in excess of $1 million, according to Variety.

More than 90 percent of the Guild voted in favor of the strike, Straczynski said, which is unprecedented for a WGA motion.

The 1988 strike had at least one famous impact on science fiction history: the second season of Star Trek: The Next Generation was shortened from 26 to 22 episodes, and producers were forced to dive into the Paramount archives to find existing scripts they could repurpose. A handful of scripts from the mothballed TV series Star Trek: Phase II were adjusted for The Next Generation‘s crew, including the Troi alien baby episode “The Child.”

The season finale, “Shades of Grey,” was a clips show, and widely panned by fans as the lowest point of one of science fiction’s best television series.