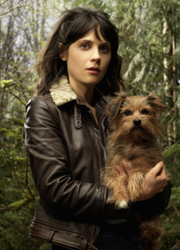 Night 1 of the new SCI FI Channel miniseries Tin Man is the network’s highest rated telecast ever, SCI FI announced today. The first installment in the reimagining of L. Frank Baum’s classic tale “The Wonderful Wizard of Oz” earned a 4.2 average household rating, and was watched by more than 6.3 million people.

The premiere unseats the 2002 hit Steven Spielberg Presents: TAKEN, which drew 6.1 million viewers and went on to win an Emmy Award.

For comparison, the network’s highest-rated series is currently the reality series Ghost Hunters, which typically earns ratings between 1.5 and 1.7 on Wednesday nights. Stargate Atlantis remains the top-rated scripted series currently airing, with a 1.05 average (through eight episodes).

The ratings record is particularly impressive in the new world of DVR time-shifting, which has hit ratings hard across the TV landscape. Overnight ratings for many series, and scripted dramas in particular, have fallen significantly as viewers record the show to watch later in the week.