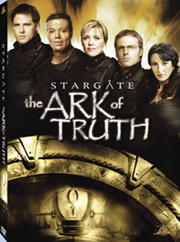 UPDATE: Additional data is now available from The-Numbers.com, which is reflected in the revised story below.

Stargate: The Ark of Truth is off to a great start in its North American DVD release, landing in the Top 10 on the national DVD sales chart in its first week.

The film ranked ninth on the chart, according to Video Business. Among direct-to-DVD releases, it was second only to Disney’s Snow Buddies.

The-Numbers.com has slightly different numbers, putting The Ark of Truth in seventh place (well ahead of Snow Buddies, which was in its sixth week of release).

The Top 10 chart for the week is heavy with new releases, including DreamWorks’s Bee Movie (first place) and recent Oscar winner No Country For Old Men (second). Disney’s 101 Dalmations took third place in its second week of release.

Bee Movie earned about $50 million in its first week, according to Reuters. The Ark of Truth picked up 9.3 percent of that, according to Video Business, or about $4.65 million. This was about $500,000 shy of eighth place.

According to The Numbers, Ark earned about $3.2 million and moved 191,086 units. The discrepancies between the two charts demonstrates that both are estimates, and not extremely accurate.

The film had a reported production budget of $7 million.

The Ark of Truth has also sat at or near the top of Amazon.com‘s daily sales charts for the past several weeks.

Stargate: The Ark of Truth is on DVD at stores everywhere in North America! Learn more in GateWorld’s movie guide, and order now at Amazon.com.