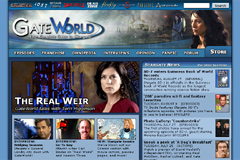 Regular readers of the Internet’s largest Stargate Web site may have noticed a new addition in the last few weeks: GateWorld.net has debuted a new user commenting system, allowing readers to instantly post comments on the site’s content.

The comment system has been in beta testing on the live site since mid-February, and is officially “ready for prime time.”

Readers can post comments on news stories, cast and crew interviews, and GateWorld Play videos. Comment threads appear directly below each news story, on the last page of interviews, and on individual video pages (click the arrow icon in the video player’s menu).

This is a feature we have wanted to add to the site for years. In fact, we had a system in place and ready to go in 2006, when we relaunched the site as “GateWorld 2.0.” As the new site went live we realized there was a major bug preventing it from functioning on our live server.

We’re pleased to make this feature available now to compliment the site’s content and our 32,000-member discussion forum. Only some 15 percent of GateWorld’s regular readers are members of the forum, and we encourage especially those who don’t actively post in the forum to use the new comment system to share their opinions and interact with other fans.

Use of the comment system is subject to a set of basic rules, so please look for the “Comment Rules” link below before you start posting.

We hope you enjoy this subtle but important new addition to the site! Depending on reader response, we are also considering adding comments to other portions of the site, such as the episode guides, in the future. Drop a comment on this story to let us know what you think of it, and which other areas of GateWorld you’d like to be able to comment on!