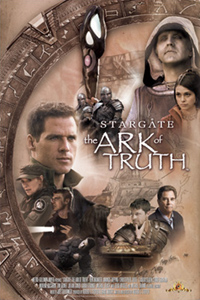 Metro-Goldwyn-Mayer is marking this week’s big release of the DVD movie Stargate: The Ark of Truth with the unveiling of a brand new movie poster! The poster can be ordered at MGMStore.com

, and is expected to ship on April 2.

Designed by composer Joel Goldsmith’s creative team, the poster art will be featured on the upcoming soundtrack release for The Ark of Truth (story).

“I was very impressed with the job that Joel’s people did on the cover art, and there’s a little pull-out booklet that comes with [the soundtrack],” writer-director Robert C. Cooper told GateWorld. “There’s some beautiful imagery. And so I asked MGM to put together a poster that would be reflective of that art work.”

The hand-illustrated poster features the SG-1 cast in familiar moments from the film, which concludes the two-year Ori story arc. It also features prominent Ark of Truth characters including Adria, Tomin, and one of the Priors of the Ori.

“That’s the image that I had in my mind when I thought about a one-sheet for the movie,” Cooper said.

Get the poster now for $20.95 exclusively at MGMStore.com

. Stargate: The Ark of Truth is on DVD now at Amazon.com and stores throughout North America. The Ark of Truth movie soundtrack will be available soon. Watch GateWorld for the latest updates!