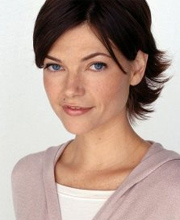 Actress Nicole de Boer has been cast in an upcoming episode of Stargate Atlantis, executive producer Joseph Mallozzi told readers of his blog. de Boer will play Dr. Alison Porter in “Whispers,” expected to air as the seventh episode of Season Five.

The actress is a veteran of the science fiction genre, having played Ezri Dax in the final season of Star Trek: Deep Space Nine. She also played Sarah Bannerman for six years on the USA Network series The Dead Zone.

“She is someone we’ve been wanting to get on the show for a while now and we’re pleased the opportunity has finally presented itself,” Mallozzi said.

In “Whispers,” Alison Porter is a scientist described in the script as a “cute nerd.” She strikes up a friendship with Carson Beckett (guest star Paul McGillion) when he and Sheppard arrive on the planet which Porter’s team is exploring.

The rest of the all-woman Atlantis recon team has also been cast. In addition to Leela Savasta as Captain Alicia Vega (story), the team will consist of Christina Cox as Major Anne Teldy and Janina Gavankar as Sergeant Dusty Mehra.

Cox, 36, Cox has appeared twice on Stargate SG-1. She played the alien T’akaya in Season Two’s “Spirits,” and rogue N.I.D. operative Lieutenant Kershaw in Season Five’s “The Sentinel.” The actress has also appeared on such series as Blood Ties, Andromeda, and House M.D.

Gavankar has had a recurring role on The L Word, in addition to other projects.

In other news from Mallozzi, executive producer Brad Wright’s script for the upcoming season has been renamed from “The Shrine of Talus” to “The Shrine,” due to legal clearance issues.

Finally, the second half of the mid-season two-parter now has a working title: “The Lost Tribe.”

Learn more about “Whispers” and the rest of Season Five in GateWorld’s growing episode guide! New episodes kick off this July in the United States.

(Thanks to David for the tip)