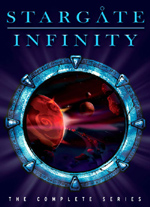 The 4-disc set includes all 26 episodes from the Saturday morning television series, which was produced by DiC Entertainment and aired in the “4Kids” block in the fall of 2002. The remaining first (and only) season aired in U.S. syndication during the 2002-2003 season.

Episodes are presented in their original full-screen (1.33:1) aspect ratio, with a total run time of approximately 600 minutes. The suggested retail price is $34.99.

Set 30 years after SG-1, Stargate Infinity tells the story of a team of young S.G.C. cadets led by Major Gus Bonner, a veteran of the Stargate program who is accused of a crime he did not commit. Forced to flee Earth through the Stargate, Bonner and the team travel from world to world trying to make it back home, clear his name, and do battle with the Tlak’kahn — a race of lizard-like warriors.

Visit GateWorld’s Stargate Infinity guide for more on the animated series! Buy the DVDs now at Amazon.com for just $20.99 (40% off!) or at Amazon Canada