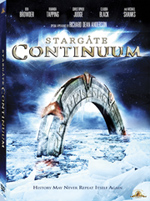 The long-anticipated SG-1 movie Stargate: Continuum will arrive on Region 2 DVD in the U.K. and parts of Europe on 18 August, MGM and Fox Home Entertainment have announced. The Region 2 DVD is now available for pre-order at Amazon.co.uk

The disc will carry a suggested sticker price of £19.99, and will include the anamorphic widescreen film with 5.1 Dolby digital surround sound. The list of bonus features has not yet been announced, but will probably match those of the North American release:

(Region 2) or Amazon.com (Region 1)! Learn more about the movie and browse through our growing photo gallery in GateWorld’s Movies guide, and don’t miss our mostly spoiler-free pre-review of the film.

(Thanks to General Catflap, Janet, and many others for the tip!)