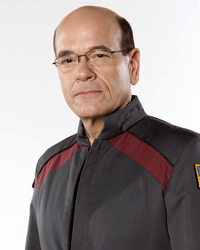 The veteran actor joins the cast of Stargate Atlantis as Richard Woolsey, the civilian representative of the International Oversight Advisory who takes command of the expedition to the Pegasus Galaxy.

MGM tells GateWorld that there are no new cast photos available so far, other than Picardo’s. The SCI FI Channel and MGM may have decided to forgo a new round of studio shots — something that happened once every few years during SG-1‘s ten-year run — or they may simply not be available yet.

Click on a thumbnail below to see the photo!

Before his recurring role on Stargate SG-1 and Stargate Atlantis, Picardo gave life to one of science fiction television’s most compelling characters: the Emergency Medical Hologram (“The Doctor”) on Star Trek: Voyager. His career also includes roles on such classic series as China Beach and The Wonder Years.