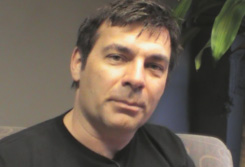 For many Stargate SG-1 fans the end of July can’t arrive quickly enough! On July 29 Stargate: Continuum, some of which has been filmed for well over a year, will finally arrive in homes in the United States.

Longtime franchise director and creative consultant Martin Wood sat down with GateWorld to discuss two of his favorite scenes from the film. Contrary to many of his interviews, his standout moments for this feature boil down to the characters.

“In Continuum there are two scenes which I knew were going to be good, but when I actually read them I flipped past them,” Wood told GateWorld earlier this year. “One of them is a scene in a hangar with Michael, Amanda, Ben and Beau … It was one of those scenes where I’m whipping through the pages, and I’m thinking ‘When’s the next explosion going to happen?’ I’m reading it and thinking ‘This is going to be good, so I’m going to cover it like this.’

“As I watched the scene rehearsed I looked at Brad [Wright, Continuum writer] and said, ‘I need another camera.’ He goes ‘Why?’ I said, ‘I don’t want to miss this. I don’t want to miss what’s going on. I’ll order up another camera right now.’ We brought another camera in that day and I shot more film on that scene than I did for half the movie. Because I really wanted to cover it in a certain way. I wanted to cover it so in the edit suite we would be able to put together the scene I had seen rehearsed.”

In our interview, Wood explains that when he first reads a script he visualizes each scene, but when it comes time to shoot the actors add their own depth that he did not necessarily envision. “It was magic,” he said.

This particular scene in Continuum deals with SG-1, trapped in an alternate timeline, attempting to plead their case to General Hank Landry. One of Earth’s greatest threats has altered history to suit his goals — this cannot be a good thing. But this Landry is quite happy with the way his timeline is going … so far.

“If you listen to each individual one you’ll want to go back and play them again and again and again, because you want to hear what each of them is saying.”

Pre-order Stargate: Continuum now at Amazon.com on DVD or Blu-ray and support GateWorld with your purchase. Look for the complete, 45-minute video interview with Martin Wood later this week, exclusively on GateWorld!