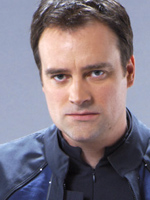 Stargate Atlantis co-star David Hewlett joins us for this week’s very special episode of the GateWorld Podcast (online Tuesday night), but we also couldn’t resist asking him some questions about the show’s surprise cancellation last week (story). Hewlett expressed his disappointment at the show’s end, but is also remarkably positive about what is ahead for him — and the chance to revisit Rodney McKay in the future.

“I’m not ashamed to say, I love McKay,” the actor told GateWorld. “I think in the same way as fans, I’m going to miss him on a weekly basis. I’ve really had an awful lot of fun doing that part. … McKay is definitely one of those characters that I hope is around in some way, shape, or form for a long time. Because he really is such a pleasure to play.”

David said that, while it’s easy to forget the “business” side of show business during the grind of filming every day, he actually likes the transitory nature of the industry.

“It’s such a weird profession this way,” he said. “There’s a sense when you are doing it that it will go on forever … but everyone knows that it won’t. So there’s that weird sort of duality the whole time, realizing that while it feels like this will go on forever it doesn’t mean that that is necessarily going to be true.”

“Who knows what can happen next? That really is the thing that excites me about this industry and this profession. You never know. Who knows where we could be next year? That’s kind of a cool way to live your life, I’ve got to say. It’s kind of the way I dreamt it would be. I think that it’s the double-edged sword of being in this industry. It can change with one phone call. It’s like winning the lottery — every time you go in for an audition you’re basically buying a ticket, and that ticket can take you anywhere and make you anything.”

In the wake of the cancellation news, former Stargate SG-1 leading man Richard Dean Anderson paid a visit to the Atlantis set.

“There’s something about having RDA say, ‘I’m sorry that you won’t be coming back next year’ that kind of makes it worthwhile,” Hewlett said. “I don’t know why, but of everybody who said anything to me about it, I felt like he knew more than anyone what it was like to have to walk away from a character like that.”

But don’t count out McKay or the rest of the Atlantis team yet. Hewlett is eager to return for 2009’s Stargate Atlantis movie, and hopefully an on-going film series after that.

“I think it will be nice to see it ‘grow up’ into a movie or a series of movies,” he said. “That would be ideal! I would love to come up and do a couple of movies a year. That would be perfect.”

“There’s always that need to go on and move on, and there’s always the hope that there will be other, McKay-like characters that people will identify with. But I feel like for five years I did everything I possibly could to make that character come alive, and I’m very, very proud of the years we’ve had. And I’m very, very proud of the people I’ve worked with, and the crews, and everyone for everything they have put into this.”

New episodes of Stargate Atlantis continue to air Friday nights at 10 p.m. (9 Central) on the SCI FI Channel in the United States! Don’t miss more from David Hewlett — in which he also talks about whether the show is ending too soon, and what he’ll be doing next — later this week.

Visit David Hewlett on the Web at dGeek.com!