SciFi Wire has just published an early peek at the look of Stargate Universe! The third live-action Stargate series is now in pre-production in Vancouver, British Columbia.

The show is set on board an Ancient ship called the Destiny, which is even older than the city of Atlantis. The four pieces of art show an internal corridor of the ship (below), a door, a console, and a “shuttle bridge.”

That’s the first indication we have seen that the Destiny will be equipped with smaller vessels, a la Atlantis’s Puddle Jumpers, for the team to use for travel between the ship and the various planets they visit. 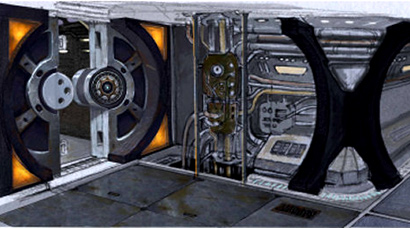 Concept art, of course, plays a big role in set construction and in helping the producers translate their imaginations to the screen. At this stage, Universe appears to be living up to its promise to be somewhat darker and edgier in tone than the stark, military feel of SG-1 and the bright, sleek look of Atlantis.

Check out the rest of the concept art now at SciFi Wire!

Stargate Universe will begin filming in February, and premiere on the SCI FI Channel in the U.S. next summer. Learn more about the show and its characters in GateWorld’s new Stargate Universe Launch Center!