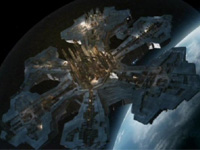 Fans of Stargate Atlantis are eagerly awaiting 2009, which will conclude the SG-1 spin-off barely after the new year begins.

GateWorld caught up with Robert Picardo (“Richard Woolsey”) to get his thoughts on “Enemy at the Gate,” the 100th episode of Atlantis which has been rigged to serve as the series finale.

“I thought they pulled out all the stops for the finale,” Picardo told GateWorld, “not only with different beloved characters in the Atlantis gallery that pop up, but I think it’s a pretty spectacular one hour [with] three different storylines really hurtling toward the conclusion.”

The announcement of Atlantis‘s cancellation came during shooting of “Identity,” which would not have given writers Joseph Mallozzi and Paul Mullie a great deal of time to place a bookend on the series. Executive Producer Martin Gero indicated in our recent interview that there were several ideas floating around the writers room which the team were looking forward to implementing in a sixth season.

Still, the episode remains pretty solid while wearing multiple hats, and also sweeps the show into an unexpected full circle.

“It’s going to have good action, great visuals, and it’s got a nice little emotional punch at the end,” Picardo said. “I think it was a very nice way to not only wrap up the series but to open the door to some television movies, because where we left off at the end it certainly begs the question of what’s next. I think it’s a very well-crafted finale.”

Incomplete cuts of “Enemy at the Gate,” as well as the penultimate episode “Vegas,” found their way into the impatient hands of some fans earlier this week through BitTorrent sites.

“The plan I understand,” said Picardo, “is to do a movie for sci-fi sometime in the spring, and I assume they’ll use that to platform awareness of Stargate Universe. I think that’s their plan but I don’t know.”

Stay with GateWorld for more from Robert Picardo in the coming days, including discussion on his upcoming film Sensored, his latest guest-starring roles, and the next Star Trek feature!

I really, really hope it’s a better ending then SG-1 had…and so far, it looks like it will. :-)