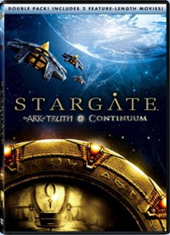 MGM and Fox Home Entertainment will release the first two Stargate SG-1 movies in a 2-disc, “double feature” release, TVShowsOnDVD.com is reporting. The new set will be released on March 3.

Stargate: The Ark of Truth and Stargate: Continuum will be released together on both DVD and Blu-ray disc, with suggested retail prices of $29.98 and $59.99, respectively. They are currently listed at Amazon.com for $18.99 and $41.95, respectively (subject to change).

Originally released on DVD only in March of 2008, Stargate: The Ark of Truth wraps up the Ori story arc from the final two seasons of Stargate SG-1. Stargate: Continuum debuted on DVD and Blu-ray in July, and is a more stand-alone, time-travel adventure. The second film also features an appearance by Richard Dean Anderson (“Jack O’Neill”).

The discs themselves are expected to be the same from the 2008 releases, including the same bonus features.

If you already have Stargate: Continuum on Blu-ray disc and are only interested in The Ark of Truth, don’t forget that the first SG-1 film arrives on Blu-ray for the first time on January 13 (story)! Pre-order it now at Amazon.com and support GateWorld.

And what of that third SG-1 movie? The producers continue to hint that it is in the works and may film in 2009. But the studio has not yet formally announced a green-light for the project. Stick with GateWorld for the latest developments.

Pre-order the Stargate: The Ark of Truth + Continuum Double Pack now on DVD and Blu-ray now at Amazon.com! Look for the original report (with large cover art) at TVShowsOnDVD.com.