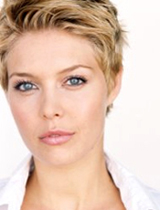 The cast of the third Stargate series is complete, with the studio today announcing the actresses who will play the show’s lead female characters.

Vancouver native Alaina Huffman (also credited as Alaina Kalanj) will play Tamara Johansen on Stargate Universe, The Hollywood Reporter confirms. At age 28, the actress is perhaps most recognizable to genre fans as Black Canary / Dinah Lance on Smallville. She also played Maureen Bowers on the SCI FI Channel’s Painkiller Jane. Her list of guest appearances also includes NCIS, CSI: Miami, and CSI: NY. She is married with two children, according to the Internet Movie Database.

The character of Tamara is described in casting documents as tough and from a modest background, who wanted to go to medical school but couldn’t afford it. She joined the Air Force instead, and though she now has only paramedic-level training, she ends up being the most medically inclined person on the ship — though she is overwhelmed by her lack of knowledge and experience.

The producers were initially seeking an Asian actress for the role.

Fellow Smallville vet Elyse Levesque will play Chloe Armstrong on the series, as we reported a few minutes ago (story). The character (formerly Chloe Walker) is a civilian and the daughter of U.S. Senator who is trapped with the rest of the team on board an Ancient vessel far from Earth.

Keep your browser locked on GateWorld all this spring and summer! We have lots of Universe coverage planned as we count down the days until the big fall premiere on SCI FI. The Stargate Universe Launch Center is at GateWorld.net/Universe.

Interesting choice. Although not a bad one from her résumé.

Brilliant! Just been looking at her previous acting jobs at IMDb and I’m very impressed!

TPTB have certainly impressed me with their casting choices for “Stargate: Universe”!

Wow! Talk about Amanda Tapping look alike. Now if she has a similar personality it’s a win win :)

In that photo she really looks a bit like young Amanda Tapping. Too bad Rodney not on the ship… He looooved those blondie babes :)

Nice. Not ultra young, and very attractive. They are really mixing up the cast this time around. I might like it.